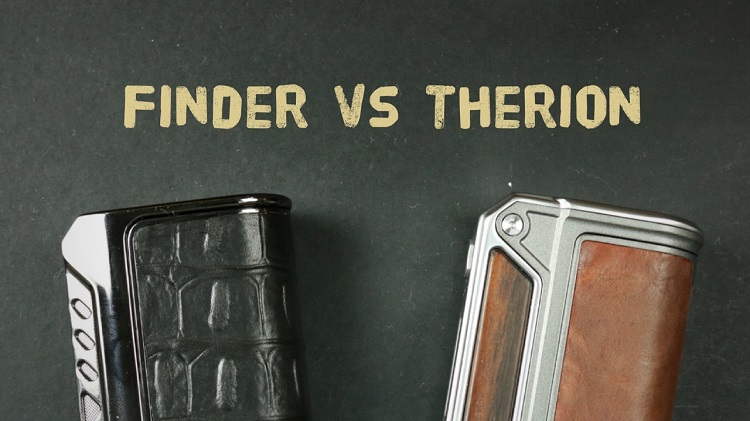 So after reviewing both the Think Vape Finder and Lost Vape Therion, I promised that I will do a separate video showing you the similarities and differences between the two popular mods.

So here it is, my Therion Vs Finder video in its full glory, which is also in a way a Lost Vape Vs Think Vape comparison.

At first glance they look almost identical except for the color and finish, but when you pay attention to the details you can see more differences.

Although I compare a Lost Vape Therion 75 to a Think Vape Finder 167, as far as I know there are no changes except the board on all the DNA variations.

Here are some of the most important differences, other thank price:

A lot of the components like the 510 pin look & feel identical in both mods.

But really, the debate is about two companies that have similar-sounding names and release these mods like they are a converted effort, with one company releasing a new DNA device within days or weeks of the other.

I honestly feel that these two companies are related. It’s not uncommon for a Chinese company to create a “sister” company and share designs, product development plans, staff and factories.

Unlike American companies, the Chinese brands are often family-run.

Instead of letting an outsider into a family business, they create a different company and welcome the investment.

At the end of the day, they make more products and have a wider net to rake in all that money from you and me. So they are not complaining.

A similar situation: Companies like Wismec, Eleaf and Joyetech are all related. You’ll see many Joyetech innovations and parts used in Wismec or Eleaf mods.

Anyway, I hope you enjoyed this comparison video.

If you’re looking for great DNA75, DNA200 or DNA250 mods, check out my ultimate compilation of the best Evolve DNA mods & squonkers.

I hope you enjoyed this Therion Vs Finder comparison video, remember to subscribe to my YouTube channel.

Buy the Best CBD Gummies to Help You Sleep

Why Cbd Edibles Are A Leading Choice For Many