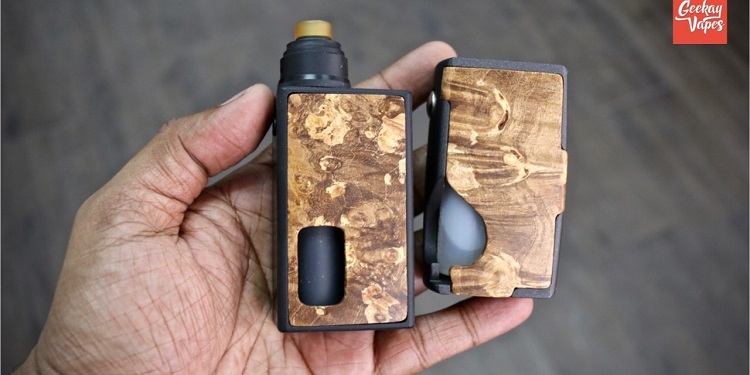 Making My Own Stabwood Doors & Panels!

I love Starwood mods, and I’ve spent quite a lot of money on some. I also have some stabwood doors and panels for my squonk mods. However, getting them is always hard.

First, I don’t like to buy just ANY stabwood door or panel. I must love the wood and colors. Secondly, they are pretty hard to get. You have to X1 in most cases, and I never get those X1s in fast enough.

So I always end up buying some neat stabwood doors in the aftermarket. That’s not quite easy either. Most people want to sell their stabwood door along with their mods, which in most cases I already have.

That’s why recently I decided to make my own doors, panels, and (hopefully soon) driptips. I bought four stabwood blocks at great prices, each costing me between $45 to $70, excluding shipping. These are full-sized blocks for making mods, but the people I buy from do occasionally have smaller blocks for sale.

I do not have proper milling tools, or a CNC machine. I figured there must be a way to do this with the tools I already have – a few saws, a Dremel 4000 with accessories, and sandpaper. I already have tons of magnets and MicroMesh from my DIY squonk mod series.

I have to admit, it’s very difficult to do without the proper tools. The most challenging part was cutting the wood blocks for to thinner panels. Initially I tried to do this with a hand saw, but it took really long and the cuts were always crooked. This meant more sanding just to remove the materials I do not want.

Then , I bought a cheap miter box that allowed me to cut at 90 degrees or 45 degrees pretty easily with my hacksaw. Using a clamp to hold down the wood, I could place my hacksaw in the miter box and saw the wood into thinner pieces as straight as possible.

As you can see, they come out pretty good. I was able to get six pieces from one wood block, each measuring about 6mm to 8mm.

Next, came a lot – and I mean a LOT – of sanding. You have to first sand down the pieces to make them as flat as possible on both sides. Be prepared for a lot of saw dust; wear protective eyewear and a saw dust mask.

My first attempt was a simple rectangle door, for the Punto Zero mod. I basically outlined the door based on the others I have, and then made a few holes for the squonk bottle using a drill.

I also have a Dremel Motosaw that I used to cut out the squonk hole, but I wasn’t very useful. It’s actually better to just drill a hole at all the rounded corners, then use a file to file down the hole to the correct size.

In the second attempt for my Vicious Ant Spade, the Dremel Motosaw was very useful indeed. It allowed my to cut all the curves, but I left some slack instead of trying to cut accurately. Then, with both the doors, it’s a matter of just sanding down slowly and measuring for fit.

I got a bit impatient with the Punto Zero doors and did the rounded corners first. They ended up a bit too round as you can see, but still pretty ok. Then, more sanding, test fitting, and sanding again.

The final step was to use MicroMesh and sand it in stages until you get a prefect smooth finish. Here’s the tutorial on how to make stabwood shine with MicroMesh. At the moment the doors are press-fit, although I will be drilling some holes for magnets.

I learned that it’s possible without CNC milling, but you need to have patience. The results may not be as perfect as doors and panels made by a machine, but it is VERY satisfying to see the result.

The Spade door was just a test so I used the scrap piece of the stabwood block. The grain direction made it look not as good as the Punto Zero doors although it’s from the same wood block.

For my first try, I am perfectly happy with these. Plus, you cannot beat the economics. Assuming I can make six panels from a wood block, each panel cost me only about $10-$15 on average. Of course, that excludes the time I spent on them.

But hey, no more X1s, no more waiting for vape mail from USPS for two weeks. The best part is that I can get exactly the wood I want, and keep the block as long as I want until I decide to use it.

No regrets, and I will get better at making these.