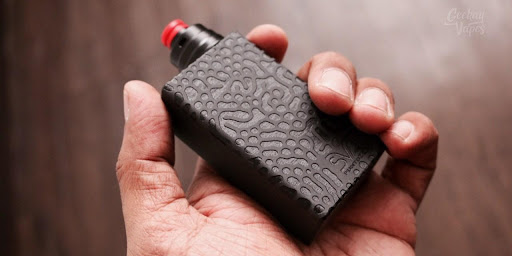 A Day With My SVA Punto Zero Engraved

Yesterday, I took the plunge and bought an authentic SVA Punto Zero with engraved back. Now, you know that I have reviewed the YFTK Punto Zero clone before on my channel, so getting the authentic was a surreal experience for me.

The authentic SVA costs 10x more, which was hard to swallow. However, I knew that SVA mods have great long-term value, and if I passed up this chance to get one at RRP I would end up paying some flipper much more.

My only hesitation was the fact that SVA has a Punto Zero Version 2 out now. I’ve seen people flipping them for as high as $800. The verson 2 has a slightly more rounded edge, and uses an all-new Mosfet switch.

The new switch has built-in LED indication and several basic protections. You can turn the swith off with a few clicks, activate stealth mode and other basic functions. This new switch makes takes it a huge leap ahead of any Mosfet squonk mod in the market.

However, I think they are so new that the only people who have them got them recently at the Paris Vape Expo 2017. I will wait till I can get one at RRP so that I will not lose much when (and if) I decided to sell it off.

So How is the SVA Punto Zero?

Fantastic. Right away you can notice the build quality inside and outside. Way better than that YFTK SVA clone. Of course as I said, it also costs 10x more. The clone could have been better with just a little more effort and QC, but it is what it is and only YFTK has made them.

I paid slightly more for the engraved back, but I think it’s worth it. SVA is now a global brand, but keep trying to be small and sell to the same crowd. As long as they sell out everything they make, they do not seem to mind.

Since they are leaving all that money on the table, it’s inevitable that the clones would swoop right in and cash in.

Should I Do a SVA Punto Zero Review?

Honesty I don’t think that’s necessary. There’s nothing technologically great about this mod. It’s all about the SVA brand, and I know I will be getting a lot of jabs in the YouTube comments for just the price.

Plus, I cannot help you get one. So why would I want to spend all that time recording a video to show you something that is already an older model? You can of course always ask me about it, and I will let you know what I think.

I’ve tried the Solo RDA on the Punto Zero, and I spent today taking some pictures for Instagram. It’s the smallest squonk mod I have, maybe slightly larger than the Steam Rabbit squonk mod I reviewed recently.

It’s very light. I’m actually pretty scared that I might drop and break it. So for now, I’m using it only in the studio.

Is it the best squonk mod I have ever tried or own. Hell no.

I still think the DPM Li-Mo is going to be my all-time favorite, with the Limelight Gloom coming in second place. I don’t see the SVA Punto Zero overtaking these two.

My Stabwood Mods Collection & What I Love About Each