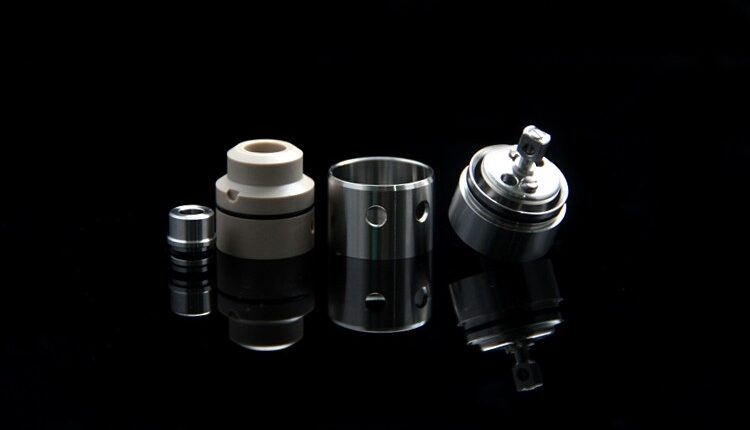 Vaponaute Le Mirage clones – how good are they? If the authentic Le Mirage worth getting at $120 a pop? That’s what you will discover in this video.

Ok so I don’t have the authentic, but I have two Le Mirage clones – the SXK Le Mirage clone and the SJMY clone. So in this video I show you both, and compare them side-by-side, piece-by-piece.

The Le Mirage is an RDTA – Rebuildable Dripping Tank Atomizer. You build your coils vertically, going with either a single coil or dual cil build. Then, you will your organic cotton all the way to the bottom.

In the bottom tray, you can squirt in 2.8ml of juice. It hold the liquid and feeds it up to your coil with your long wicks. That’s basically how an RDTA works, and I have reviewed other RDTAs like the Geekvape Avocado, the Wismec Theorem, the Fodi F2, and the Ijoy Limitless RDTA.

What makes the Le Mirage different is the limitation to vertical builds only, a single center post, reduced chamber and swirling air flow. This design is not shocking if you’ve used other Vaponaute stuff like the Le Magister or Le Zephyr before.

Another thing is the build quality – the Le Mirage clones you see in this video do a good job at copying the uniqueness of it, but we have to give credit to the authentic. 22mm and short, the Le Mirage doesn’t even try to be anything else than a Le Mirage.

It is definitely meant to be a flavor chasing atomizer, although I could get decent clouds from it.

Which Le Mirage Clone is Better?

Which of the two Le Mirage clones do you prefer? Let me know in the comments section below.

For me, the SXK is the better of the two Le Mirage clones, although by just a tiny bit. Both clones have good build quality, and most of the pasts appear to be identical. I’t almost like everything else except the build deck came of of the same “mega clone” factory.

The biggest issue with the SJMY version is the o-rings. In the video I was already on my last spare o-ring, and that broke as well after barely two days of use.

The SXK has issues as well with o-rings, but my spare is holding up pretty well. However, unlike the SJMY you do not get those silicone plugs for a single coil build.

Are There Other Le Mirage Clones?

I’m sure there will be more clones, but for now there are just these two. Two well-known clone companies going at each other for the title of the best Le Mirage clone. When there are other clones, I will list them below so you can take a look.

After going through these clones, I understand why Vaponaute designed the Le Mirage the way it is. I also bought myself a Le Magister and Le Zephyr clone. Who know, maybe in the near future I might just dish out $120 for an authentic Vaponaute Le Mirage!