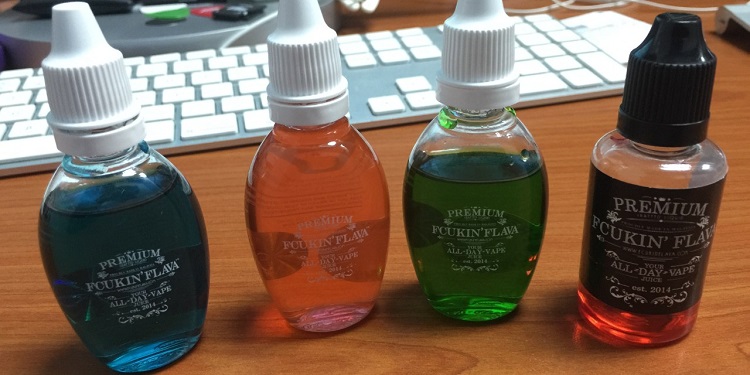 Fcukin Flava is an awesome e-juice made right here in Malaysia. I’ve tried a few and I loved almost every single one!

The most important thing: How do you pronounce that?

At first I thought it was just a creative way of saying “Fucking Flavor”. Obviously of course you can’t have your label use an F-word and get away with it.

Then I got to thinking it was a “silent F” – which would mean you pronounce it as “Cukin Flava”. Doesn’t sound as cool and perhaps over-complicating things a bit, especially here in Malaysia where people pronounce “phoenix” as “fo-nix”.

The after going to several vape shops, it seems most people agree that it is indeed read as “Fucking Flava”. Well, whatever. In my opinion they should have made the name simpler.

My First Encounter with Fuckin Flava

I bought my first bottle of Cool Berry by chance. At that time I had no idea what I wanted except that it had to be a simple fruit-flavored juide. So the guy at a vape sho (can’t remember which one)

Compared to other Malaysian ejuices that seem to leave a rather hard aftertaste in your mouth, Fcukin Flava juics are very well-balanced. From what I’ve heard, their brew is one of the outstanding examples of Malaysian-made flavors that actually ship to other countries.

However, there are a few issues with Fcukin Flava.

I have read online reports from the Fcukin Flava’s own FaceBook page of people replacing the liquids with their own knock-off brews, which of course taste aweful. Then there are sound-alike ripp offs as well.

This has prompted the company to completely redesign their bottles to include a fake-proof version, but users are reporting leacking and other issues with their bottle.

Today, most vape shops seems to have very limited quantities of Fuckin Flava available. In fact, I heard that Vape Empire, the largest vape store chain in Malaysia, don’t even carry their flavors. That’s weird, I thought. Must be a failed business deal of something, because why wouldn’t they want to reach so many vapers in Malaysia?

Reading their FaceBook page, I gather that after the whole fake product issues, they have decided to limit the number of distributors, and stopped selling wholesale to most individual buyers.

That’s fine, but the problem is most of their so-called distributors don’t seem to be doing a great job at distributing.

The distributors listed on the Fcukin Flava website link to individual FaceBook accounts, so I can only assume that these are trusted friends of the owner. Great, but is this really the best way to do it, to get your flavor out to meet the demand out there?

I contacted one of the distributors on FaceBook and PMed him that I would like to buy a few bottles of Freezy Mango.

To which he replied “Which color is that?”

WTF? What kind of distributor doesn’t know what he is selling?

I know sometimes people think their shit will always sell well so they can take their time and get their act together. But if people can’t find their shit, they eventually move on and find other stuff that they may like even better.

Several online vendors seem to have Fcukin Flava in stock, but it’s hard to trust these after reading about all the fake products out there.

These are the Fcukin Flava juices I have tried up till now:

Most of the juices seem to be 50/50 PG/VG so it will work well with almost any setup. There’s the Cloud Series which is 100% PG. I have not tried that, because that is even harder to find.

These guys made a good line of ejuices. They got popular, but sadly I think they are not good business people. They seem to be unsure how to maximize the demand for their product. Their FaceBook page doesn’t enage with tusers – almost no replies to comments.

Fcukin Flava needs to get their together, as people like me start to wonder if their e-juices are really worth all the hassle.

My FastTech Order Arrived! How Long Did It Take?