In this instalment of DIY squonk mods, I show you how to build the 20700 squonker by Toaster Design. Do also take a lok at the first three parts:

Keep in mind, that a lot of the explanations for the parts and tools are in Part 2. To keep this video short and only about the 20700 Toaster Design mod, I do not repeat them here.

Toster Design is headed by Mark McManus, and the mods retail for about £99 – £130. There’s a whole range of mods that they made, but the most recent is called the “Tiny V3”.

Just as I was preparing to record this video, Mark McManus declared in the group that he will no longer be making mods for sale. However, his designs will remain in the Toaster Design Shapeways page. This means that the only way you can get a Toaster Design mod now is to build one yourself.

Overall, the enclosure and door I purchased from their Shapeways store was very good. Although I basically bought the cheapest Nylon version, the finishing and measurements were pretty exact. No issues here.

The contacts for the 20700 mod are actually designed to be thinner than the ModMaker mod I built. Since I was using the ModMaker precut copper strips, I have to trim down the strip to fit this mod.

You can get the design details in PDF from the Toaster Design FB group. This is for the Tiny V3 but should give you a good idea of how to cut for this mod. Here’s how the design looks like: 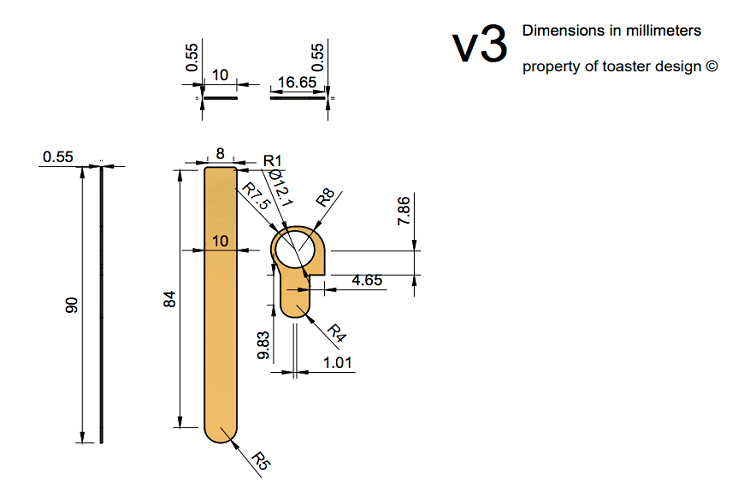 It would certainly help a lot if you knew the exact measurements for the contacts. Also, it’s still possible to buy pre-cut brass strips from the group.

I might do a future video about the Tiny V3, but I think I’m heading more towards trying to do a DIY regulated squonk mod. I have my plans to get a Florisbox DNA60, but I really have no idea how that one will turn out.

If you want to get the Toaster Design mods printed for you in a range of quality and finishing options, visit their Shapeways store.