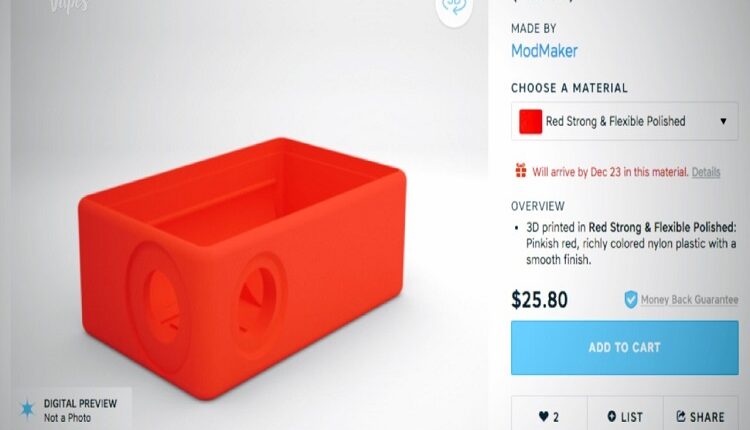 People have always told me that most of the 3D printed squonk mods I have reviewed in the past (including the Steam Rabbit V2 and the Boxer Classic BF) cost way too much for what they are.

With the recent push from Chinese companies to make affordable squonk mods, you can get an awesome deal with the Pulse BF for example. A nicely done squonk mod that can take a 20700, with soft silicone bottles and a locking mechanism. Great value for money, no doubt about that.

However, there’s something interesting about a DIY squonk mod. In fact, there’s always that excitement when you build anything. You get to see it transform from mere parts into something that actually works.

When you think about it, most squonk mods are using parts that you can buy yourself. However, not everyone has a 3D printer or the skills to print a good squonk enclosure from nylon or alumide.

Recently, after watching the Mark Todd video and doing some research of my own, I have started to believe that I can build my own 3D-printed squonk mod.

I already have tons of ModMaker parts including the ModMaker 510, copper contacts and bottle tubing from my attempt to upgrade my existing squonk mods. I’ve also experimented with dyeing my 3D printed squonk mods.

Here’s what I have found so far from my research, the total cost of building one from two different sources. I’ve excluded the cost of magnets (dirt cheap), extra bottle tubing, batteries, and the tools you will need to make it work.

The options available from Toaster Mods looks interesting enough. The pictures on their site are not the actual thing (computer graphics), but it looks like they have put a lot of thought into the design of a simple box.

Their enclosures do also seem to be higher quality. It seems they are using nylon plastic, polished to a smooth matte finish.

Here’s how much it will cost to DIY a 20700 squonk mod from them, and parts from ModMaker:

This is the most expensive option of all the sites I’ve listed here. Granted, this is for the 20700 squonk mod and they do have a few designs for an 18650 squonk mod. However, the difference is minimal.

They have design for both single 18650 and parallel 18650 squonk mods. Surprisingly enough, they did not include the button / actuators as part of their design. This is probably so you will get the ModMaker actuator button, but I’m ok with that.

Also, they do not sell the printed mods from their store, probably because their system cannot handle the customization.

Here’s how much it will cost to DIY a ModMaker 18650 mechanical squonk mod, assuming you buy the print from Shapeways:

I used the cheapest options available from Shapeways for the calculation, although you can get better quality print and finishing for slightly more. Previously, the Alumide option was available but I missed that, and it’s all nylon now. However, the doors are also available in acrylic.

And yes I am aware that you can just simple print the actuator, if you have a 3D printer. 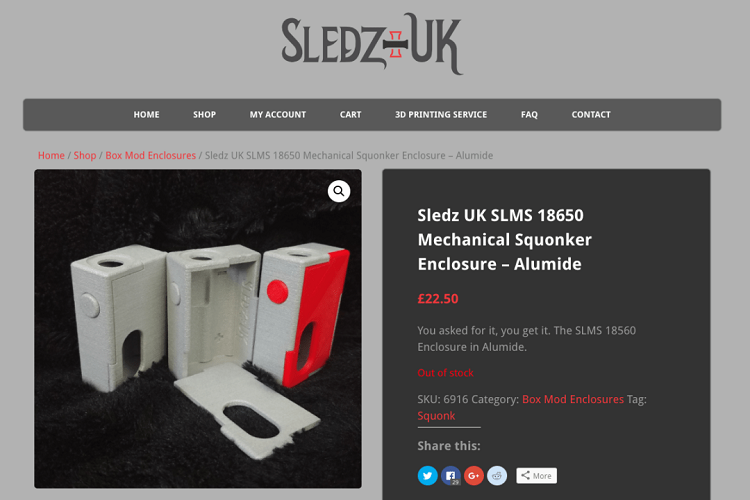 You can also get squonk mod enclosures for 18650 or 20700 from Sleds.co.uk. They are actually using Alumide, which should cost more across the board. However, it looks like there is no finishing, sanding or polishing options available compared to the ModMaker options on Shapeways.

Again, you would need to source ModMaker parts and a ModMaker 510, so the cost would be:

The folks at Floris box mods have enclosures for all kinds of mods, but I’ll just talk about the squonk mod enclosures. Among all the other options here. Floris has the best options for doors, buttons and finishing. They even have an option to include your own logo engraved into the mod.

I looked at the Little Orca, which uses Acetal for the print and a carbon fiber door plus Delrin actuator. Unlike the other options here, the Little Orca has no Floris branding inside or outside (correct me if this is not the case).

Here’s the cost to DIY a squonk mod from Floris box mods:

The calculation above is for the base options, including a 12mm hole (yes you got to pay extra for a hole) to fit a ModMaker 510. Of course having this option means you’re free to use any other 510 as well, and get a hole drilled to match the desired 510.

I’m assuming the ModMaker parts will work, because there’s no clear information on the Floris site as to which parts to get.

So it’s not as cheap as you may think to build your own DIY squonk mod. The cheapest option is to use the ModMaker files and print it yourself, spending only for the internals. That’s of course assuming you already have a good 3D printer.

The Pulse BF at about $30 suddenly looks like a great deal.

I was very impressed by the options from Florisbox. I think their price is just incredible, and the variety of options are astounding. However, at this point of time I need more research into what components will fit the Floris, so I will skip this option for now.

The Sleds squonk box seems a bit raw to me, which means I have to finish and polish it myself. Again, I will skip this option for now.

I would love to get a 20700 squonk mod from Toaster Designs, but I have to keep this for later as well. The cost is a bit too high at the moment and the Christmas expenses have left me dry.

As I was doing this research I came across many other options, including tons of 3D print files on Thingverse. However, I’m going to have to choose one.

I decided to go with the ModMaker DIY squonk mod option, for a few reasons:

So I placed an order on Shapeways for two ModMaker DIY squonk mods, both with a nylon black body. I ordered a red nylon door and an acrylic door. The process was easy enough through Shapeways, and I was charged $20 for shipping.

I also ordered the ModMaker 510 and all the other parts I do not already have. Sadly they did not have a black actuator at this time, so I had to get a stainless steel actuator.