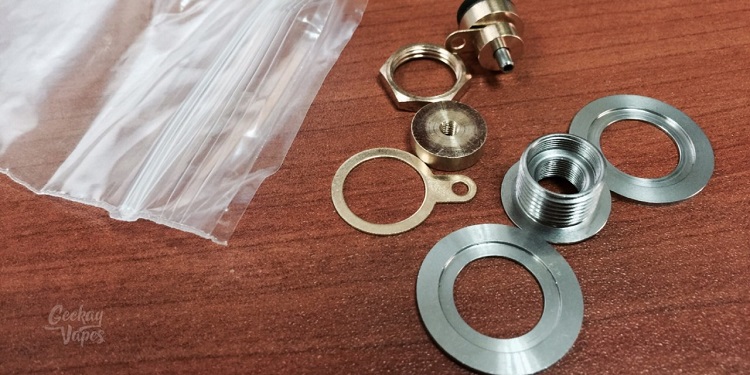 So I decided to try upgrading my stabwood squonk mod with the ModMaker 510. I’ve heard so many positive reviews about it, and I’ve even used one in another squonk mod.

My RC Mods stabwood squonker is currently using a Fat Daddy Vapes or FDV 510. It’s the one with the red oring on the top plate. The problem with it is firstly some leaking, but also a noticeable voltage drop.

So after asking around in the Squonker’s Paradise International FB group, I was told to get the ModMaker 510. However, that’s the easy part. In order to make the conversion, I would also need to dril a larger hole to fit the ModMaker 510.

I ordered one from the ModMaker website, along with some squonk tubes, magnets and other stuff that is impossible for me to find anywhere else. I also got the larger nut as you can see in the picture, just in case I needed it, along with some copper contacts.

Build quality of the ModMaker 510 is fantastic. Smooth threads, and really simple to put together. I have to stack two 22mm plates to get the correct heigh for the conversion. However, I still need to purchase a step drill bit from Amazon before I start.

Believe it or not, I searched everywhere locally for a step drill bit and found nothing. So, Amazon is my last hope and even on Amazon only a few sellers would ship it to me.

I’ve seen videos of how to do it, and I think this ModMaker 510 is going to be awesome.

The prices on the ModMaker website are really good, and they do not overchange on shipping. I only wish they would also add other squonk 501s like the ModDog 510 or SVASK. It would be great to get a few 510s before I decide to hack my squonk mod, but for now the ModMaker 510 will have to do the trick.

A Day With My SVA Punto Zero Engraved