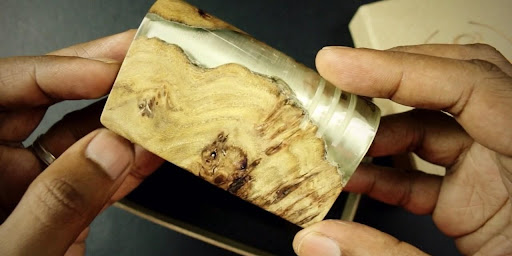 The Problem with Stabwood Mods

When you see a stab wood mod for the first time, its hard not to fall in love with it. It looks beautiful, unlike any other mod you’ve seen with so much character and wonder.

It makes all your other mods looks like cheap crap. But are stabwood mods all they are cracked up to be?

But I really want to share with you something about my fist stabwood mod purchase, when I was not a 100% sure of what I would get and if it was worth all that money.

My Attempt at Buying a Stab Wood Mod

I’ve been searching online and trying to Google for stab wood mods, but it was pretty useless. As I soon found out, most stab wood modders operate on Facebook and Instagram only, and the mods are sold from their Facebook groups and pages.

So I started hunting down the modders, joining which ever group i could. It’s not as easy as it sounds, since most of these groups are “secret” groups. The public groups are “closed” and require approval by an admin before you’re in.

Eventually I found a few mods that I liked, but it seems like everything was already sold to someone. Only the pictures were left to tease me and show me what I could not have.

But, eventually I took the plunge.

My first stabwood mod was the TS-Flip, a hybrid DNA40 mod made in Malaysia. I did feature it in one of my review videos, and I got so many questions about the mod.

I bought it used, since I wanted the specific hybrid version, which apparently is no longer in production. Only one of those hybrid mods were made, I was told, and so I hunted down the owner.

After some negotiations, I was offered to purchase at about $800. That was too high for me. A few weeks later the owner PMed me and offered the mod at $600. At that time, I didn’t know what those mods actually sold for, but a quick check with the modder revealed that it was a fair price.

So I bought it, and paid for FedEx shipping. It arrived within days.

It looked great in pictures and in the video, but holding and using it was less “magical” than I initially thought. It felt lighter than I had assumed, but it made sense.

Stab wood – or stabilized wood – is very light. All the moisture has been removed from it during the stabilization process, which helps prevent the wood from rotting.

But there were a few other things I didn’t quite like.

For one, it has a DNA40 board that didn’t have USB charging. I knew that the mod used a DNA40, but I always assumed a DNA mod would have a USB port for charging.

Apparently, most stab wood mods that use the DNA40 chip do not have a USB port either. If you don’t believe me just go back and look at the picture of a stab wood mod you like. Chances are, it uses a DNA40 board without a USB port.

That meant that I would need to replace the battery regularly, but still no biggie.

But, the battery post was also a bit of a hassle to get it out and back in, and since the DNA40 doesn’t maximize my battery, running a build at about 30 watts was too much and required very frequent battery changes.

Next, every time I screw on an atomizer I had to manually adjust the 510 pin. Some atomizers would not make a connection even when the 510 is at its max height. Pus, the 510 screw itself may actually fall out if you unscrew it all the way.

With all these factors combined, and the fact that I was afraid of damaging the mod, meant that I hardly used it. When i found the opportunity to trade the stab wood mod for two very good Provape mods plus cash, I took it and I have no regrets.

Since then, I have researched stab wood mods more throughly.

But really, finding and buying a stab wood mod is as difficult as ever. This is why I’m working on creating the ultimate list of stab wood & high-end mods on my site.

I hope that with this list, you’ll be able to easily compare between the available stab wood mods, check their specs, and know where to buy them.

Feel free to contribute to that list and help me grow it. It’s not perfect, because information about stab wood mods are still hard to come by and verify.

So… Should You Buy One?

Absolutely, you need a stab wood mod in your collection. But do not hurry.

It’s easier said than done, since stab wood mods are unique. If you see something you love, you may never find another with the same style or wood or color.

But rushing into buying one can leave you disappointed.

You should know the board well. For example, you should have experience with a DNA40 and DNA75 board, the two most common boards used in stabwood mods. You should also be familiar with the SX350J by Yihi, another popular board for stab wood mods.

Whenever possible, try to get a hands on with the mod so you know how it feels. Do not spend too much on your first mod, no matter how rare it is.

The good news with stab wood mods is that you can sell it a year from now at a good price. Unlike cheap Chinese mods or even DNA mods, stab wood mods hold value well.

You might eve get lucky and find a buyer who is willing to you more than what you bought it for. Like I said each od is unique and sometimes people are willing to spend more to get something they love.

Refer to my list of high-end stabilized wood mods for more information on whats available. I will be updating this list regularly, and it will be a great starting point for you.