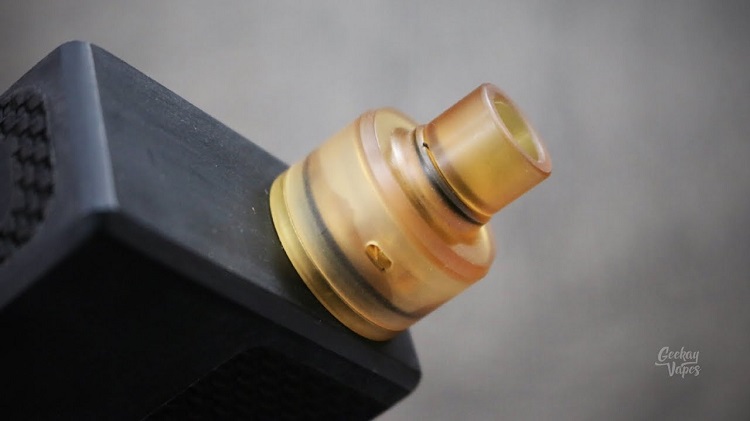 The Ultimate RDA Level 1 by GoM

So this written review of the Ultimate RDA Level 1 by GoM (Guild of Modders) is a bit late. The video review on YouTube was published much earlier.

Still, I think this review means enough to earn a spot on my website. Not all YouTube reviews make it here. So obviously this one is still worth talking about.

The Ultimate Level 1 (version 1) by GoM made waves when it was featured in a FlavorChasers.com review. In fact that’s how I heard about it. If I’m not mistaken, it got a 9.9/10 rating on FlavorChasers.

(For the record, the rating on FlavorChasers is fucking useless, everything is a 9+..)

The central concept of modular airflow – you’re able to change airflow styles and positions easily – attracted me to the Ultimate. I eventually managed to get one through a friend in the Philippines.

It costs $90, and the packaging has changed since. GoM is also supplying slightly thicker o-rings due to many people having issues with the spinning deck. However, the core part of the Ultimate Level 1 remains the same.

So here we go, my honest review of the Ultimate Level 1 by GoM PH.

I was annoyed, delighted, sad and amazed by the Ultimate RDA all at the same time. As you can see, I listed an almost equal amount of pro’s and cons.

To be honest, I decided to sell my Ultimate RDA after the review. Then, I decided to try one more time, with one more build. This time, I would build according to what the Ultimate RDA can take and is designed for, instead of trying to force massive coils into it.

Just like that, my mixed feelings about the Ultimate RDA turned into pure love. This was after the review above was recorded, and I had no other issues with the AFC. GoM has fixed the o-ring issue, and I respect their professionalism in light of so mane negative reviews.

I also heard from Dave Cho that he is not giving up on the project. He has planned some black Delrin caps, Haku-style airflow, and future improvements. The best part is that due to the modular design, all these new things will fit the Ultimate RDA that I have.

The Ultimate RDA has grown on me. It is quickly becoming my #1 flavor-chasing squonk RDA setup. It’s an acquired taste.

Love it or hate it, but you cannot ignore it.

How to Dye Your 3D-Printed Mods