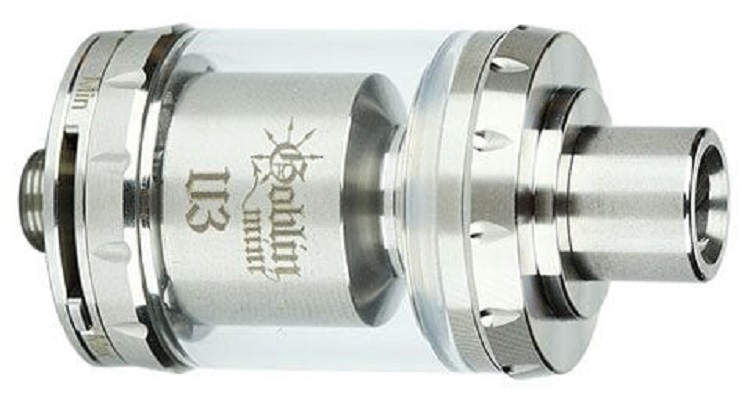 The Goblin Mini V3 is one of the most anticipated tanks of 2016, due to the success of the Goblin Mini V1 and the disappointment of the V2. In fact the V2 was plagued by so many issues that it was discontinued very quickly by UD.

You can still get clones for the Goblin Mini V2, but the promise of an improved Goblin Mini lingered on. People loved the original Goblin for it’s short build, flavor and looks. But it also had a few things some people didn’t like, such as bottom-fill holes, inaccessible airflow controls, and a small build deck.

So when UD asked me to review Goblin Mini V3. I could not resist. I had to know if the promised messiah, the V3, was all that it was supposed to be. Watch my first look video about the Goblin Mini V3 and UD Mesmer.

Here are the basic specs of the Goblin Mini V3:

So, is the Goblin Mini V3 any good?

Firstly, let me state that I received two Goblin Mini V3 samples from UD. The first one has issues in so many places – rought threading, weak o-rings, stiff airflow / juice flow – all of which contributed to constant leaks.

Then I received an “updated” version that fixed almost all of those issues. So my review is based on the “fixed” (production?) version, and I hope that’s the version you would receive as well.

The size is a big plus. I used to hate small tanks, but I have come to accept them. Short and only 22mm, the Goblin Mini V3 is welcomed with open arms by tiny mods like the Vaporesso Target Mini or the Eleaf Pico.

I also like the fact that it has both single-coil and dual-coil decks, and changing them out is relatively easy. There’s an o-ring at the bottom of the removeable deck that is the cause of my leaking issues, before UD fixed it with a more durable o-ring.

I loved the new bottom plate in the Goblin Mini V3 that makes the airflow more accessible when fixed to your mod, and also avoids condensed vape from seeping into your 510 port. I like the juice flow control, although you can accidentally twist it open when you’re screwing back the topcap.

The build quality, threading and deck are all good quality. I love the rugged look.

The other obvious thing – 2ml of juice.

I know this was done to satisfy the TPD regulations, and UD does have an extension tube to bump that up to 6ml. However, it’s sold seperately and ruins the look of the Goblin Min V3.

Is it the best short sub-ohm tank on the market? I highly doubt that even though I have not tried most of the newer short tanks. I will doa comparison with the Serpent Mini soon, so make sure you checkout my YouTube channel for the video.

UD Mesmer Review – Almost There But.