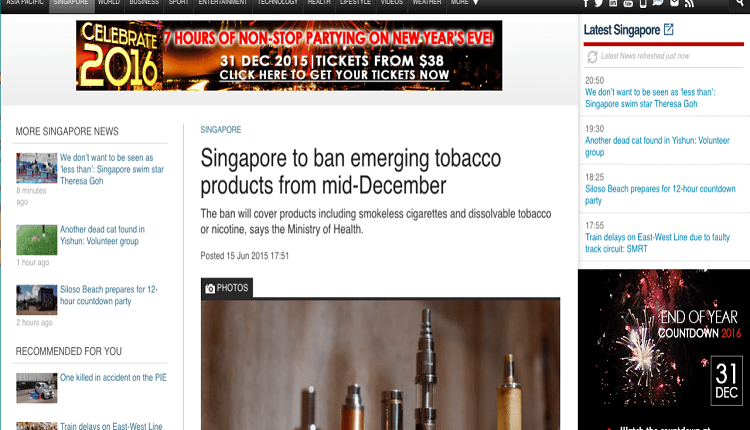 On 15th December 2015, Singapore’s complete ban on vaping was implemented. Along with this ban, most other tobacco-related products like shisha will also be banned in stages.

The Singapore government is not kidding either, the penalties you can face if you get caught at the airport with a vaporizer, according to the Straits Times:

Here’s the irony: You can easily buy a pack of cigarettes all over the tiny island for an incredible price of $13.50.

WTF? Why don’t Singaporean leaders have the balls to just ban vaping, instead of ridiculous education projects that will no doubt waste their taxpayer’s money?

Is it because of (drum roll)… MONEY?

Smoking is only “regulated” but not banned in Singapore. Regulation includes strict rules on where you can smoke. Mostly, poor Singaporeans are confined to tiny smoking areas, often having to walk a few hundred metres to get to one.

But let’s not be naive to say that Singaporeans don’t smoke in public areas – you just need to go to Geylang to see people smoking everywhere.

But Singaporeans Can Still Vape!

Singaporeans can easily get all the vape gear they need from Johor. In fact, the vape business in Johor has been booming due to the demand from Singaporeans, who can afford to buy the best stuff available in vape stores.

On 29 November 2015, Straits Times rans the story about the Sultan of Johor ordering all vape shops in Johor to shut down by 1 January 2016.

The article also had a confusing remark:

The Sultan warned that those who flouted the law after Jan 1 would face the consequences.

From my research, the sale of nicotine products without license is against the law in Malaysia. In fact, the Malaysian authorities did a major search-and-grab raid in November 2015 based on this reason alone.

(Less than a month after those raid, vape shops are apparently not only back but doing more business than ever in Malaysia)

So if vape shops continue operating and only stop selling liquids that contain nicotine, what “consequences” can be brought down upon them by the Sultan, who based on my research, does not have the power to implement new laws by himself?

The Secret War Against Vaping

The sad part of all this is, the winners a.k.a British American Tobacco and friends, are laughing all the way to the bank. They are winning the war against vaping. People are starting to say “vaping is more dangerous than smoking”!

Singapore has been on a decade-long crusade to get rid of cigarettes and smoking. But when they find the best chance to do so, they ban it without waiting for any credible research.

Have they ever asked themselves, “What if we are wrong?”

What do you think about the ban of vaping in Singapore? Do you know fellow Singaporeans who secretly vape and how do they get their stuff? Do you think there’s something fishing going on between Singapore and Johor for mutual benefit, by banning vaporizers?

Bought a Kanger Evod from FastTech

Vaper’s Tongue: What Causes It and How To Get Rid of It Effectively

Open Vape: Vaping 101: A Step-By-Step Guide on How to Refill…

Vaper’s Tongue: What Causes It and How To Get Rid of It…

Buying Your First Vaporizer? Read This Before You Make Your…